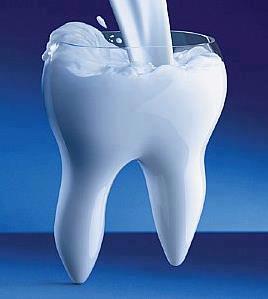 All we know, that calcium, protein and vitamin are acknowledged d for the pivotal factors of correct development of bones and teeth.They contribute to construction of osseous mass, they decrease the risk of breakage and spowalniaja, process rozrzedzania of bones following with the century.

According to made public research in Journal of Periodontology, the charitable activity nabialu is not limited only to hard tissues of our organism, but also has influence on przyzebie.

The consumption of milk, serums, jogurtow and other products of milk every day in quantity of 55 grams and more definitely decrease the value of the index of the depths of gingival pouches and the losses przyczepu of epithelial, which this they are indicators of promotion parodontozy.

The excavation of gingival pouches and the loss przyczepu of gums to dental necks till the looseness of teeth they can be reduced!

Has this meaning not only in the dimension of a good form of gums and przyzebia, but how perfectly we know, also in the context of general health.

The diseases of gums since they are closely connected with diabetes, osteoporoza, by the risk of fall and other illnesses of the system of circulation.

American Academy of Periodontology confirms, that million adult people suffers on the ignitions przyzebia. Therefore dairy produce this is the basic element of the diet not only for the children and women, which they want to decrease the risk rzeszotnienia of bones, but for all society taking care of not only the gums, but also all organism.

Welcome to the clinic

Would you like your smile to be a pride?

I will take care of it! I invite patients from Szczecin and neighboring towns to get acquainted with the full offer of dental clinic IPS-DENT, as well as to arrange a visit. I guarantee a thorough diagnosis of dental health and bite in order to choose the optimal form of treatment. IPS-DENT offers a full range of dental care for the whole family. I work over 20 years on how to get Patient smile and I think I know how to do it.
See you!
Piotr Szumiłowicz

This side benefits with ciasteczek in order to testify service on the highest level. More distant profitting from the side indicates, that you agree on their use.Agree